Malta House of Care is pleased and proud to announce the names of the Wonder Women Class of ’20 – the 10th anniversary class! We will celebrate these seven “ordinary women doing extraordinary things” at an awards ceremony and fundraiser on Tuesday, September 7, 2021, 6-8:30pm, at the Wampanoag Country Club in West Hartford. Reservations will open July 1, 2021.

Maryse Adonis of Newington, a native of Haiti who in her retirement founded www.arm2arm.net, a non-profit that organizes disaster-relief trips to Haiti, the Dominican Republic, and the Bahamas. 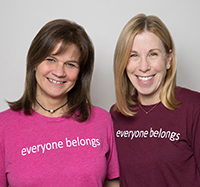 Noelle Alix of Simsbury (right) & Kim Morrison of Avon, founders of BeanZ & Co. coffee café in Avon, which employs both fully abled and developmentally challenged adults; they are also advocates for the broader adoption of inclusive employment practices in the business community.

Sandy Cassanelli of Glastonbury, a breast cancer “metavivor” since 2015 and founder of “Breast Friends Fund,” which has raised more than $390,000 to support breast cancer research at Dana Farber Cancer Institute.

Wilma Hoffman of Newington, a retired Bulkeley High School teacher who founded the “Knitting Club” at Hartford’s New Visions Alternative High School, where boys and girls who have been expelled from the Hartford school system derive satisfaction and solace from learning to knit.

Pauline Olsen, MD of Farmington, a retired OB-Gyn and former missionary and/or relief worker in South Korea, Haiti, and Dominican Republic, who co-founded and continues to volunteer weekly at the Malta House of Care Mobile Medical Clinic and also founded the Malta Food Pantry at St. Justin’s-St. Michael’s Church in Hartford.