In Their Own Words: Patients, Volunteers, Donors 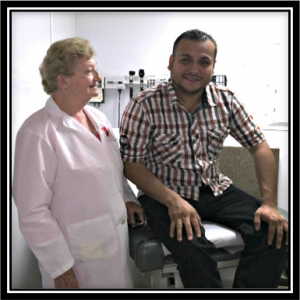 In May 2016, Nestor Garcia Valencia, a 37-year-old chef from Hartford, suddenly lost a lot of weight and was constantly thirsty and fatigued. Although he works full time, he could not afford to carry health insurance, and so he turned to the Malta House of Care for help at the suggestion of his mother, also a Malta patient. In just one visit, he was diagnosed with Type 1 diabetes, treated with insulin, taught how to test his own blood and administer his own insulin each day, and was sent home with enough insulin and testing materials to last six weeks. Since then, he has returned to the Malta van for follow-up visits, where a diabetes educator has helped him learn his “new normal,” with adjustments to his diet and lifestyle, and where other volunteers have helped him complete the paperwork for applications to Patient Assistance Programs so he can obtain insulin in the future. Until he is approved for a PAP, Malta House of Care is providing his required medications at no cost to him.

Today, Nestor has regained much of his weight and is feeling “himself” – able to keep up with the demands of his job and the joys of his family, including his 7-year-old daughter. He says he is very grateful for Malta House of Care: “Because of them, I’m here right now.” 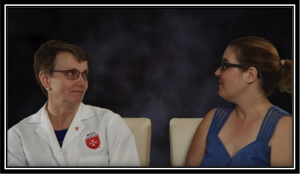 In July 2016, 43-year-old Donna Risley came to Malta’s site near her home in East Hartford. Donna and her three daughters were living with her parents in the aftermath of her layoff from her longtime job at a local company and her husband’s death in 2015. She had no insurance, but knew she had to see a doctor about the worrisome swelling in her legs and feet. “It was so bad I could barely walk,” she said. Donna heard about Malta from a flier that her mother gave her. After her initial visit, she was sent to St. Francis Hospital for additional tests, including a CT scan. That’s when things got really scary.

“Later that night I got a phone call – actually, several phone calls,” Donna said. “Dr. Caputo tried to reach me a few times. She told me they had found blood clots in both of my lungs and I had to go to the Emergency Room right away, because it was an emergency, it was life threatening. They wound up admitting me and then later that night, they did an ultrasound on my legs and found that I also had blood clots in both legs. And they said that probably the clot that was in my leg, one of them had like, broken off and gone up into my lungs.”
After a week in the hospital, Donna returned home to her family. “Malta House saved my life,” she said, expressing gratitude to Dr. Caputo and the rest of the team. “Without Malta, I would have been dead. They don’t just help the patients themselves, but they also help their families who care about them.”

Working at the Malta House of Care Mobile Medical Clinic is the most rewarding medical practice I have done in 35 years of practicing medicine. I have been working at the Malta Clinic for more than 10 years. There is something very unique and rewarding about taking care of those who need help. The patients are very grateful and, for the most part, are lovely, graceful people who deserve all that we can do for them.

It is amazing to me how often we can make a huge difference in people’s lives by simply controlling their blood pressure, treating their diabetes, and doing something about their cholesterol. A lot of being able to do that depends on having a relationship with the patient … having time to really talk to them, get to know them and the non-medical challenges they face in their everyday lives.

People who don’t have insurance often feel less than completely accepted. I think one of the most important things that we do at the van is assure each person that they matter. And if they matter, then it matters what they do for their health.

I’ve visited the Malta House of Care Mobile Medical Clinic in Hartford, and I spoke to many patients while they quietly and sometimes nervously waited to see a doctor or nurse. The physicians and nurses who volunteer their time are always busy and deliver important, excellent primary care to an otherwise underserved population in our city.

Asylum Hill values our partnership with the Malta House and the good work you do in the community. It gives me a sense of pride anytime I drive in the Asylum Hill neighborhood and see the Malta House van traveling to its next destination. Thank you for all that you are doing to keep our community healthy.

I always try to read David Brooks’ column in the New York Times. His column yesterday was superb and had a quote that I now have over my computer so I see it every morning when I sit down to work: “Joy is the present life gives you as you give away your gifts.”  That quote says it all when I think of the opportunity I have to be involved with Malta House of Care — and I might guess it would be true for all of our volunteers and staff, as well.